Share a memory
Obituary & Services
Tribute Wall
Read more about the life story of Wayne and share your memory.

Wayne Edwards, 77, of Waco, passed away on Friday, December 2, 2022, at Providence Hospice Place. His family was able to be by his side in his final days. Visitation will be from 4:00 p.m. to 6:00 p.m. on Tuesday, December 6, at Grace Gardens Funeral Home in Waco. The funeral service will be at 11 a.m., on Wednesday, December 7, 2022, at DaySpring Baptist Church in Waco with Rev. Eric Howell officiating. Burial will follow at Riesel Cemetery.

Wayne was born in Washington, D.C., on January 28, 1945, to Robert and Edna Edwards. Growing up, Wayne enjoyed spending time at the farm with his grandfather, singing, playing guitar and playing baseball. He served in the U.S. Capitol as a page as a young person and made many memories traveling around the country with his family.

Wayne came to Waco to attend Baylor University in 1963 where he majored in political science and was a member of Lambda Sigma Chi fraternity. It was during this time he met his beloved wife, Sharon Brown. They were married December 23, 1966, at Alice Avenue Baptist Church in Waco. Wayne and Sharon were blessed with three children: Anna, Sara, and Joel.

Wayne worked as a history teacher and purchasing manager. He enjoyed teaching Sunday school and singing in the choir. His favorite way to spend time was with his family camping, boating, singing, playing the piano, organ, and trumpet, and attending symphonies, choir concerts, and musicals. He liked history, and collected old coins and historical printed media. He also enjoyed working with model trains and going to museums, parades, and air shows. After he retired, he and Sharon enjoyed spending time having adventures with their grandchildren.

The guest book is offered at gracegardensfuneralhome.com where you may leave your condolences or a fond memory about Wayne.

Video is available for this event 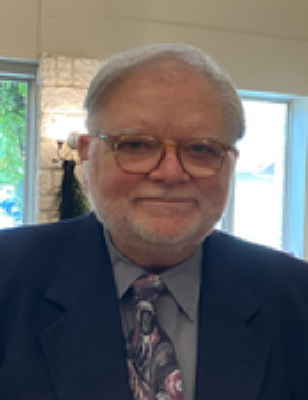